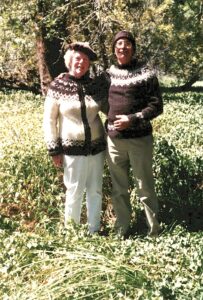 t is with fond memories we share the passing of Shelden Douglass and Beverly (Doug and Bev) Elliott, long-time residents of Floodgate in the Deep End of Anderson Valley, both passed away in 2021.  Bev died peacefully at home March 25, with Doug and daughter Terry and her wife Heli around her, following a pair of bad falls in the preceding months. A couple months later, Doug went on an extended visit to his son John’s in Baytown TX, where he enjoyed having time with this branch of the family: John, wife Ruth and two grandsons Douglass Lee and John Thomas.  Doug’s health was already in decline, though, and he passed peacefully in hospice care just four months after Bev, also with family around him. His death came just a few days shy of what would have been their 67th wedding anniversary. 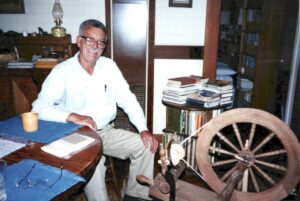 Doug and Bev first met in high school in Independence, CA, on the eastern side of the Sierras near Mt. Whitney.  Bev was born and raised there; Doug’s family moved there when his father was deployed to Europe in WWII.  They remained close through Bev’s training as an RN at L.A County General and Doug’s college education in physics at Yale.  They were married in New Haven in 1954.  After Doug finished his degree they moved back to California, to the Navy’s research base at China Lake.  There Doug had a long career in physics, meteorological research, and solar energy; Bev worked as an RN and on up to Director of nursing in the local hospital; and they raised their family. 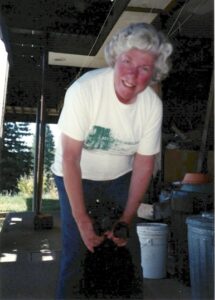 Doug’s work took them to the Department of Energy in Oakland, and finally to Barstow to direct the start-up of Solar One in Southern California. In both postings Bev continued her work in nursing and hospital administration, including forming new practices in discharge planning and quality assurance in San Francisco hospitals.

In 1982 they retired to the Floodgate property, which they found after having fallen in love with the valley, its people, and its music during visits to the north coast.  Together they rebuilt the then-100-year-old farmhouse; renewed its original orchard, put in a truck garden, and raised sheep, goats, chickens, and assorted other critters.  They also quickly became deeply involved members of the local community – both of them joining the local fire department soon after arriving. Bev worked part-time for several years at the hospitals in Ft. Bragg and in Ukiah, returning to the bedside nursing that she greatly preferred to administrative work. 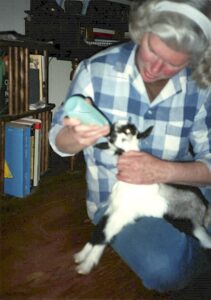 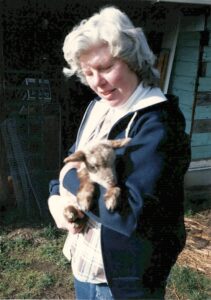 She was also a long-time volunteer for Hospice, doing home health visits all over the Anderson Valley.  Doug apprenticed in musical instrument making and repair (with a particular fondness for hurdy-gurdys), joined the North Coast Energy Services board, and built up a workshop full of an amazing variety of tools. 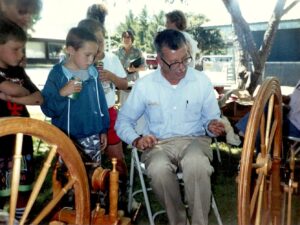 Together they dove into the fiber community – learning and teaching the whole process from lamb to sweaters, blankets, and rugs. Doug’s love of tools, repair, and restoration developed into an expertise in historical spinning wheels and looms, and Bev’s cooking skill brought her into cheesemaking, beekeeping, canning, and an outrageous collection of ribbons from the county fair. 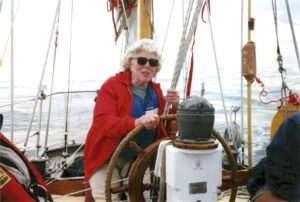 Doug and Bev’s ashes rest together in the roots of a gnarled old redwood tree in Hendy Woods, in the heart of the valley that was their home for 40 years. 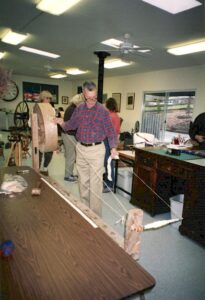 Doug was the primary spinner of the two, and because of his mechanical and engineering abilities, became the go to guy for spinning wheel repair and some loom repair.  He did a lot of research on Great Wheels and became quite the expert on them as well as an expert on the  Master Weaver Loom with its unique drum shedding system (two of them will be for sale along with several spindles Doug made and lots of Shetland wool.)

Bev was the weaver, knitter, crocheter in the duo. 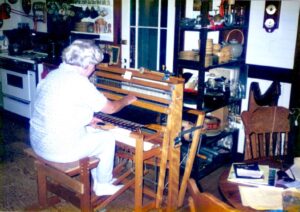 She knit the sweaters they are weaving in the photo and wove the king sized blanket that will be in the sale along with several hats that Doug spun the yarn for from their flock of 12 Shetland sheep.


SCHOLARSHIP SALE is NOW ONLINE HERE, and in person during March and April:
The family has generously donated most of Bev and Doug’s fiber, yarn, finished pieces and equipment to Pacific Textile Arts.  PTArts will be offering much of it for sale during the month of March.  The proceeds will be used to create a scholarship fund in their memory for PTArts classes.

The sale will run through the month of April online and during regular business hours (Weds. 10:30 to noon, Saturdays 11 to 1) & online. 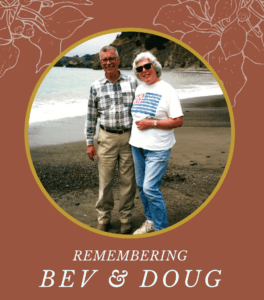